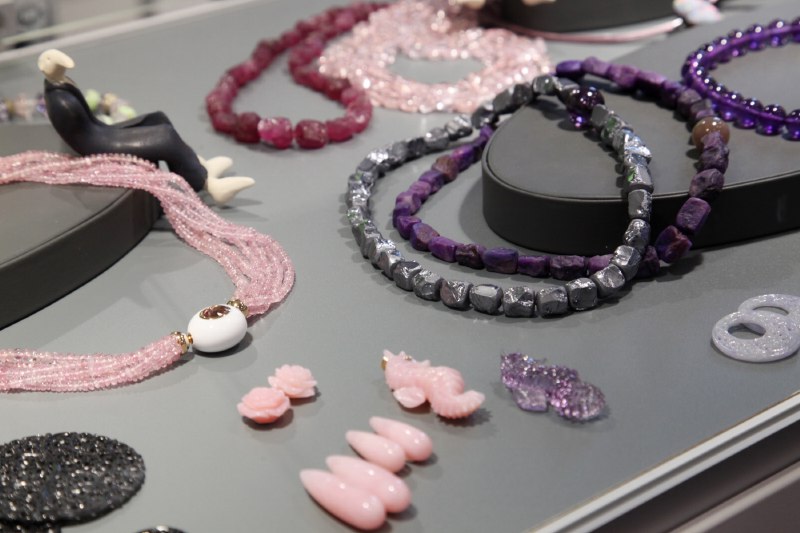 With 3,200 trade visitors and 140 exhibitors, the INTERGEM, held from 30 September until 3 October, was able to follow on from the successes of the previous year. The high quality of the purchasers visiting once again underscored the particular significance of the showcase of the industry in Idar-Oberstein.

The INTERGEM 2017 managed to buck the trend that prevailed at the other trade events this year, says the fair’s Managing Director, Kai-Uwe Hille. Our visitor figures are nearly exactly the same as those of the previous year. With regard to exhibitors we were able to welcome a total of ten new companies, a slight increase. The first two days of the fair, which were at the weekend this year, were extremely well attended in particular. The last day, which was the Day of German Unity, also ended positively. Jewellers and goldsmiths took advantage of the public holiday to come to Idar-Oberstein and buy gemstones, pearls, jewellery and equipment. This was the best final fair day for years, a great ending, says Hille.

The support programme was also well received; the quality of the gemmological presentations was faultless. In addition, the new Fancy Lounge, where the speakers appeared, also met with a positive response from visitors and exhibitors alike. The overriding motto of trust pervaded the entire INTERGEM 2017. Opening speaker Martin Julier, Head Gemmologist at Bucherer, said: In over 20 years as gemstone buyer at Bucherer I have been privileged to learn of the treasures that Idar-Oberstein has to offer the international gemstone market: Quality, consistency, punctuality, innovation, being able to depend on partners, trust. If I order a precisely-cut gemstone in India or China, I do not receive the same thing as when I place the same order here. The theme of trust was therefore a focal point of a GZ round table on the Sunday of the fair. As gemstone traders and enthusiasts we are called upon to keep up with the state of the art at all times and to communicate to the customers that the stones that they buy from an acclaimed trader also possess the assured characteristics, says Dr. Konrad Henn from Karl Faller. Visitors to this fair have this trust in us as a reputable partner.

The exhibitors showed themselves to be highly satisfied with the outcome of the fair. This has been an excellent fair for us. The quality of the visitors was high; the presentation tables were fully occupied nearly all of the time. The interest in fine stones remains high, says Nicole Ripp of Groh + Ripp. The fair was well attended, there were also numerous buyers of international renown present. The relaxed, almost family atmosphere at the INTERGEM is appreciated, says Constantin Wild, of the eponymous gemstone cutting enterprise. Vikar Ahmed of AV Gems concurs: The fair went very well, the quality of the trade visitors was outstanding, the organisation and ambience were perfect. We will be back again next year. And Dr. Konrad Henn, whose positions include Chairman of the fair association, says: We are very happy with the way the fair has turned out. The visitor structure was right. Buyers from international jeweller chains such as Mikimoto as well as proprietors of goldsmiths and jewellers from throughout Germany and neighbouring countries contributed to the success. Hans-Joachim Becker of the jewellery manufacture Richard Hans Becker is also pleased: We have been very positively surprised by the INTERGEM 2017. Although it is obviously more of a gemstone than a jewellery fair, we also managed to acquire new customers this year. The decision taken last year to exhibit here again was definitely the right one.” The special exhibition areas such as the Creativum were also well attended, as gemstone designer Carlo Wild confirms: We had a successful fair in a forum enriched by very pleasant and expert exhibitors.

The majority of firms have already exercised the option to book their stand for next years fair. After all, this years fair was practically fully booked and a good place for 2018 is essential. A number of companies even want to significantly expand their presence next year. The INTERGEM offers considerably added value for modest financial and personnel outlay. More business and more expert quality instead of a spectacular show is our motto, says Kai-Uwe Hille in conclusion. The next INTERGEM will take place from 28 September to 1 October 2018.